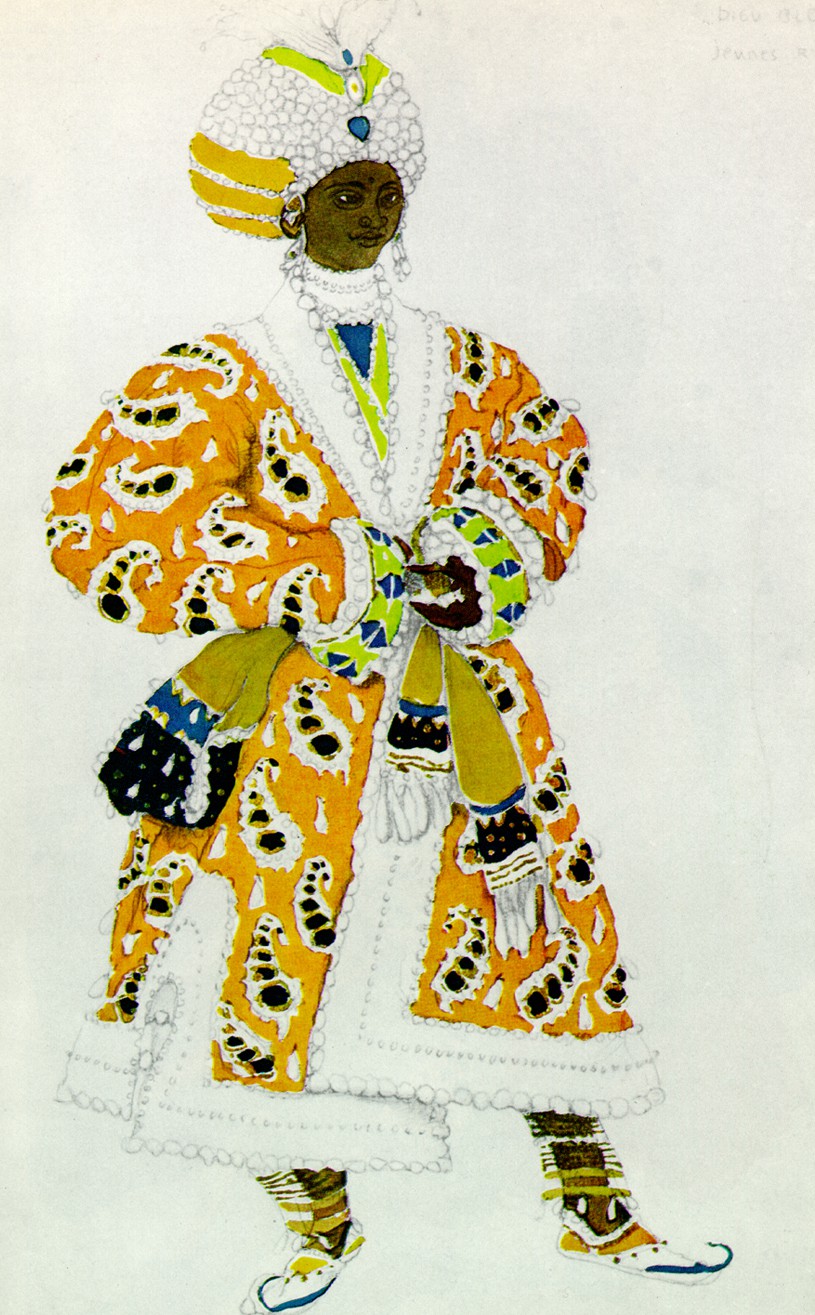 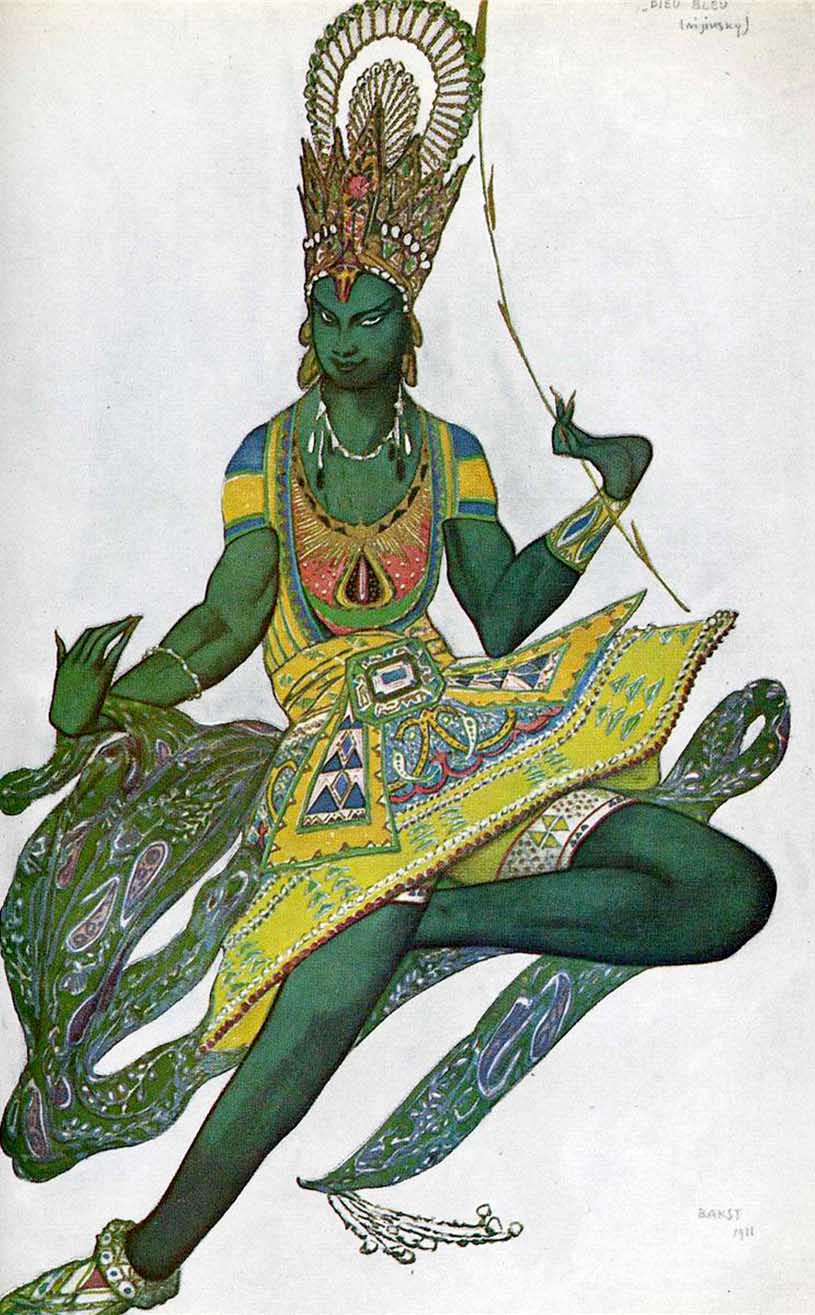 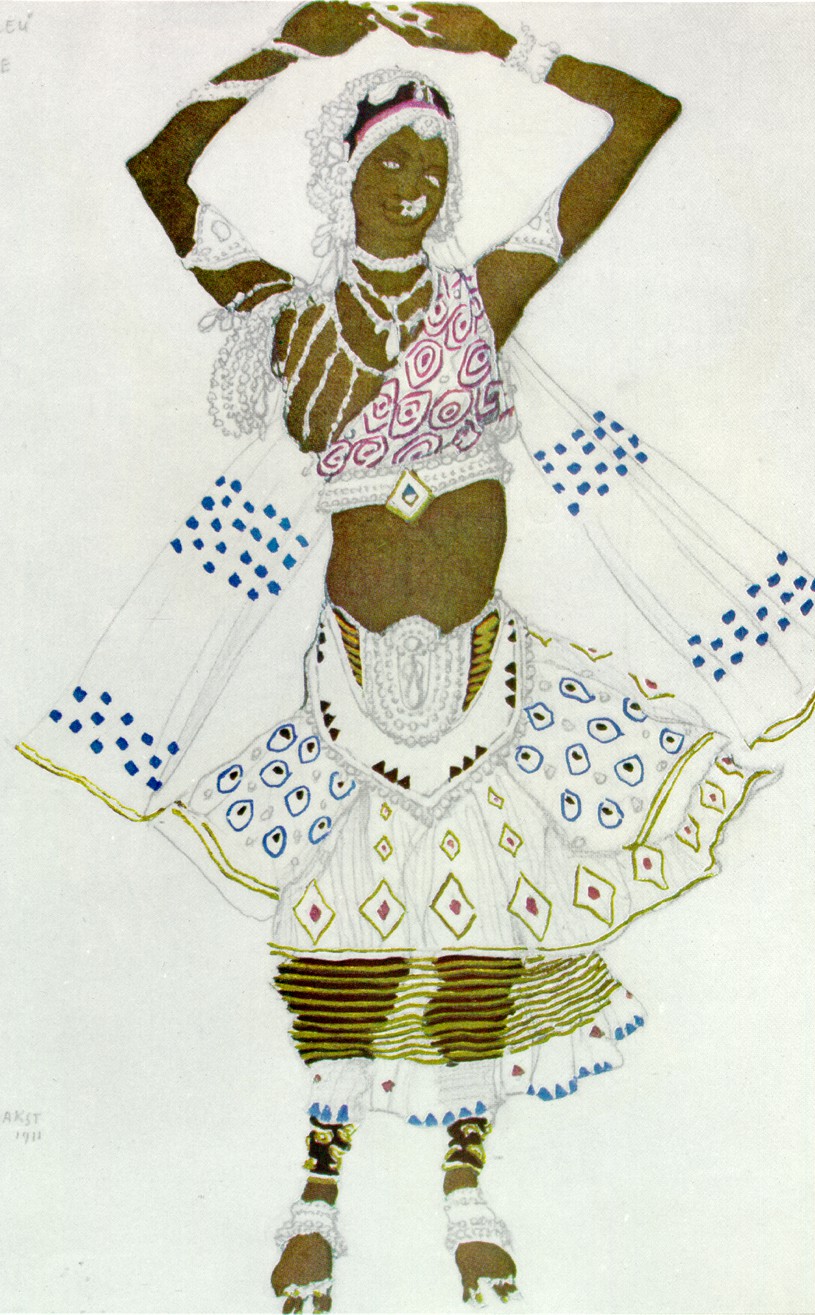 Costume design by Leon Bakst for The Blue God. 1911

The idea of creating a ballet performance using the sets and costumes designed by Leon Bakst originated in 1992. The few ramparts that remained from that staging aroused in my imagination images of an ancient Indian shrine standing on the shore of a lotus-covered lake. But there was still confusion in my mind. Processions of priests clad in white garments, snakes, Vaslav Nijinsky's fantastic costume, the photos of Tamara Karsavina, and all the contradictory reminiscences left by Diaghilev’s contemporaries. The choreographer and stage director at that time was Mikhail Fokine. All those elements were gradually growing palpable. But there was still one essential gap. It was the music. During a Paris tour I managed, although with great difficulty, to obtain a score of Reinaldo Han's original music. Painstaking efforts were taken in search of the missing sketches of costumes, materials and media articles used in that performance. Not all the clues we collected could be taken at face value — there is a lot of truth in the saying that it's better to see once than to hear a thousand times. The music was played in an arrangement for piano by Lyudmila Sveshnikova, a Mariinski Theater pianist. I did the casting: Farukh Ruzimatov as the Blue God, Diana Vishneva as the Girl, Andrian Fadeyev as the Young Man; the conductor was to be Alexander Titov. But that performance has never been staged.
And here we are in 2005: Moscow - the Kremlin - the heart of Russia. Everything is ready for the materialization of the dream, but doubts have been cast upon the music. During the staging of The Firebird and Petrushka in Dresden I again meet with A.Titov, and he suggests changing the music. As we went through every composer we could think of, my attention is drawn to the phrase: "...why don't you try Scriabin?". It strikes me like lightning. I come back to Moscow, find books dedicated to Alexander Nikolaevich, buy CDs of his music, and gradually the musical outline begins to crystallize: the first part of the Divine Poem and the whole of the Ecstatic Poem. According to reminiscences left by his contemporaries, Scriabin dreamed of performing those works in India, in some imaginary shrine in the mountains. So it seems that Providence has brought together Scriabin's ingenious music and our idea of reviving the performance. He also dreamed of a choreographic expression for his music, and unique luminous effects. I trust we shall be able to make this happen. It must not be by chance that the libretto by Jean Cocteau perfectly matches, in my interpretation, with Scriabin’s music.
Now only minor problems remain. We have to find the performer who can follow in the footsteps of Nijinsky. The ballet is now staking everything on Nikolai Tsiskaridze as The Blue God, llze Liepa as the Goddess and the dancers of the Kremlin Ballet. Bakst’s sets and costumes are restored by Anna Nezhnaya. I have seen the sets in the workshop of the Russian Army Theater, and they look fantastic. I recall how, fourteen years ago in that very same place, I saw the sets of Golovin's Firebird. Well, it happens. Deja-vu is not uncommon in my life. From my childhood I have been in love with the stage of the Kremlin Palace. It saw all my school premieres and my Bolshoi first nights. And here I am again on that stage, just as I was two years ago when the Maris Liepa Charitable Fund brought the Rome Ballet on tour, performning works choreographed by Mikhail Fokine. Regrettably, nothing but photos are now left of the choreography of The Blue God. So I had to make the bold decision to invite Wayne Eagling to direct the staging of The Blue God – not a decision I regret, since Ihave no doubt of his talent and sensitivity. We feel the same about many things, and our views on how this ballet could be reanimate and remade were in perfect harmony. Such things are rare but they do happen. This show is dedicated to the creators of the 1912 performance in Paris, but I hope that it reflects a modern relationship to that historic production.