PARIS — The premiere of a whole new ballet, especially one that draws on a legend like Sergei Diaghilev’s Ballets Russes, is a rare pleasure these days on European stages. Rarer still is the depiction in dance of the lives of real dancers.

Audiences at the Théâtre des Champs Elysées, which opened in 1913 for the fifth of Diaghilev’s ground-breaking seasons of Russian ballet, were presented with this singular thrill in late June. Les Ballets de Saisons Russes, which appeared here in 2009 on the centenary of its famous forebears, gave the premiere of “Cleopatra — Ida Rubinstein.”

Rubinstein was a wealthy Russian woman of forceful character who — bewitched by the skill of Mikhail Fokine, Vaslav Nijinsky and other stars of Diaghilev’s troupe — learned movement and drama to such a standard that she not only joined them on stage for two Paris seasons, but almost eclipsed the more trained practitioners of genuine ballet with her sensuality and fluid movement.

Indeed, she went on after those first two seasons to finance her own troupe, using her fortune and that of her companion Walter Guinness to compete with Diaghilev, who always struggled to find funds. (Ms. Rubinstein led an altogether adventurous life, fleeing France in fear of the Nazis. She eventually returned, and died in Vence in 1960).

The idea of bringing Rubinstein back to life on a Paris stage first occurred to Andris Liepa, the guiding spirit of this latter-day Ballets Russes, when he saw his sister, Ilse, dressed for the filming of his restoration of Fokine’s “Scheherazade” in a wintry January 1993. 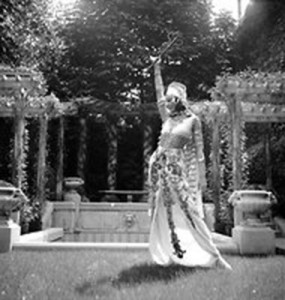 “She arrived for the first rehearsals, and I saw that it wasn’t Ilse, it was Ida Rubinstein,” Mr. Liepa recalled during an hourlong conversation in the Elysées theater. Back then, his dance career ended early by a torn ligament, he was just starting to restore Fokine’s work. He resolved to find out more about Rubinstein.

Almost 20 years later, Patrick de Bana — a colleague of Mr. Liepa from the Ballet Béjart, and perhaps best known as a choreographer for the Carlos Saura flamenco movies of the 1980s — choreographed the life story.

The premiere was supposed to be in Moscow this spring, but Ms. Liepa broke her leg in rehearsal in February, meaning that the Paris appearance was the first full public performance. There were four performances, funded by the Liepa foundation and myriad sponsors, Russian and European. More performances are planned in Moscow, London and other European cities, but nothing is firm yet.

“Diaghilev never did premieres in Moscow, always in Paris,” said Mr. Liepa, smiling. He brims with stories of the impresario and his dancers, and confesses to having “wanted to live in the world of Scheherazade” ever since seeing pictures of the original production in books in childhood.

The Liepas are steeped in dance. They are the son and daughter of Maris Liepa, the Soviet ballet star shunted aside by the Bolshoi in the dying years of Communism. Maris Liepa, crushed by this treatment, died in 1989 aged just 52.

“We are continuing what he was unfortunately unable to do,” the son said of his father and sister.

Andris Liepa was the first Soviet ballet dancer to gain permission (rather than defect) to dance with an American troupe. He danced with American Ballet Theater, and after a career-ending injury returned to Russia, which he said best feeds his creative juices. He began restoring Diaghilev’s ballets, shunned in the Soviet era because the impresario and many of his dancers stayed and died abroad, thus carrying the stigma of traitors to the Soviet cause.

Like Diaghilev, Mr. Liepa said, he is constantly on a search for money. And while the creative result of this latest ballet cannot compare with the novelty of Stravinsky’s music or the stunning folk-ballet dance of “The Rite of Spring” and “Firebird,” Ms. Liepa was almost liquid on stage, evoking Fokine’s dance movements down to her fingertips. Mikhail Lobukhin of the Bolshoi Theater was breathtakingly light as Fokine, then menacing and tortured as Cleopatra’s sometime lover Amoun. Pavel Kaplevich’s sets echoed the sculpted quality of the originals. The elegant costumes, by Yekaterina Kotova, recalled those of Leon Bakst. zonemp3.net Скачать Музыку и Песни Бесплатно в Mp3 (мп3) и слушать онлайн

“I think this is the discovery of a great new costumer for theater,” Mr. Liepa said of Ms. Kotova. “She could work in any fashion house — that’s where the money is today — but this is more interesting, if less profitable.”

As the conversation ended, Mr. Liepa greeted Georgi Isaakyan, a Moscow director with whom he plans to mark the 2013 centenary of Diaghilev at the Champs Elysées with “The Golden Cockerel.” “Look, this theater is really linked to Diaghilev,” Mr. Liepa exulted. “The phantoms really live!”