How did you meet Andris Liepa?
I actually met Andris Liepa 20 years ago during my stay as a principal dancer with the Maurice Bejart Ballet Company. He came as a guest to take part in some of our performances. Then, two years ago, I was working with his sister Ilze Liepa on a small pas de deux which we wanted to perform ourselves in Tokyo. Andris came to one of the rehearsals at the Bolshoi Theatre’s studio and afterwards told me he’d found the choreographer he’d been looking for! He then asked me if I was interested in working on Cleopatra with him. I immediately liked the idea of recreating Cleopatra; I love everything about the Ballets Russes and Diaghilev.

What interested you about Ida Rubinstein – and Cleopatra?
Well both were amazingly strong women; they knew perfectly what they wanted and what they didn’t want. I’m interested in strong historical figures anyway and I think they both had a lot to give…and a lot to take!

Were you inspired by Fokine’s original vision of Cleopatra?
The inspiration came through respect for the past and from all the beautiful decadence of early 20th century Paris. I wish I could have been there the day of the world premiere with the Ballets Russes.

Did you work closely with Ilze in bringing the characters to life?
Ilze and I worked very closely together; the scriptwriter, Jean Francois Vazelle, did a fantastic job in bringing together all the elements to give us such a good story! Everyone worked together as a team and I also worked closely withPavel Kaplevich, the set and costume designer who is really creative, really innovative; it was a wonderful experience and I’m very excited about the production coming to London in July. 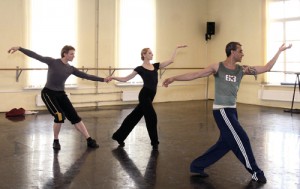 Tell us about the music of Omer Faruk Tekbilek
Omar Faruk Tekbilek is a Turkish musician and composer, who plays a wide range of wind, string, percussion and electronic instruments. He has developed a style that builds on traditional Sufi music and I felt his music was absolutely the right thing to represent ancient Egypt.

If you had the chance to meet Sergei Diaghilev, what would you say to him?
I would ask him out for dinner and would like him to tell me all the amazing stories of the Ballets Russes – I imagine it would be a long, long dinner!

What are you looking forward to doing when you come to London?
I will definitely call some old friends and I love walking around the streets of London, it’s a great city. Обзор Columbus Casino . Самое честное выгодное онлайн-казино в рунете. I love going to bookshops to look for treasures and I’m also looking forward to having a glass of white wine with a friend at the Coliseum.