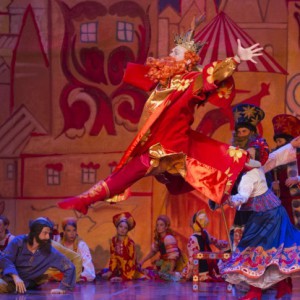 There are so many reasons to cherish this new-old, opera-ballet production of Rimsky-Korsakov’s cutting satire wrapped in a fairy tale that it’s hard to know where to start the list. But, let’s begin with this production’s many claims to uniqueness. It combines opera and ballet simultaneously over three acts (although in the interests of brevity there is no interval here between acts two and three); it brings back to life an opera-ballet that Diaghilev’s Ballets Russes premiered in Paris, a century ago, the last work to be choreographed for Diaghilev by Mikhail Fokine; and it reproduces the original designs by the great Russian artist Natalia Goncharova, which were then (and must be now) acclaimed as achieving the most spectacular, colourful stage picture imaginable. The historical reasons for cosseting this production are legion: from Rimsky-Korsakov’s remarkable nerve in so cleverly criticising the Tsar for his failed war against Japan; to the fact that casting the singer to premiere the lead role of Tsar Dodon was to be the occasion of Diaghilev’s last visit to Russia.

One more significant idiosyncrasy is that Le Coq d’Or flies again in the repertoire of an outstanding opera and ballet company based at a unique theatre for children. The Natalia Sats Theatre in Moscow is a fully-fledged opera house with a world-leading director (Georgiy Isaakyan, formerly of the Perm Opera House) and musicians, singers and dancers of high capability; exclusively provided for the edification and entertainment of children (not forgetting their parents). This institution – perhaps above all others – declares a statement of intent about Russia’s extraordinary love affair with the Arts, one that is embodied in the life and work of Sergei Diaghilev and his modern-day legatees, amongst whom the names of Isaakyan and Andris Liepa – the former Bolshoi star now committed to reviving the classic ballets of the Diaghilev era – are writ very large. What other country in the world would support a national opera house just for “young audiences”?

The novel idea of staging Rimsky-Korsakov’s opera so that the action is mimed by dancers is said to have been that of Alexandre Benois, Diaghilev’s regular design collaborator, which is ironic given that his rival Goncharova was to get the gig and dress the piece so fantastically. A hundred years’ on and although the opera remains and Goncharova’s designs have been reproduced so effectively (by Vyacheslav Okunev) only four minutes of Fokine’s original choreography has survived, captured on some grainy Australian film from the 1940s. The mimed movement has therefore been reimagined in new choreography by Gali Abaidulov (no doubt with a little help from Liepa), which fits within an understanding of Fokine’s style. A contemporary account of the London performance of Le Coq d’Or, written by Charles Ricketts in June 1914, declares that “…the choreographic invention is incomparable – (if) at times, ever so slightly, on the side of too much movement”. As some slight evidence of the authenticity in Abaidulov’s imitational choreographic skills, I might argue that this same comment could still apply.

It has to be said that the raucous designs, delicious music and glorious singing rather outweigh the dancing, which is the weakest of this sparkling production’s components. The descriptive miming action works well for the soloists, especially for the lead characters of Tsar Dodon (an excellent comic caricature by Oleg Fomin) and Tsaritsa Shemakha, the role originally danced by Tamara Karsavina here performed by Natalia Savelieva who is every inch the same ‘bewitching Hindu idol’ as Karsavina was described by Ricketts. In those days when political correctness had a very different meaning, lyrics such as “look at my gorgeous breasts” and others overtly describing the Tsaritsa’s seduction technique of old Dodon left little to the imagination.

The choreography was much less memorable for the ensemble dances where the powerful visual impact of the designs was overwhelming. I was struck by how the cartoon-like, childish joy in many of Goncharova’s designs is still so relevant today: the imagery of Dodon’s wheeled horse, the giant wooden swords and swirling, plaited beards was so retro that these could have been the designs from the next instalment of How to Train Your Dragon and the angular motifs of unhappy cats on the orange shirts of some of the male city-folk had a distinct Angry Birds feel!

The colourful impact of Okunev’s replication of Goncharova’s designs leaves an indelible mark, from the astonishing florid backdrops (evocative of William Morris after a fantasy Russian holiday) to the vivid “Munchkinesque” bald pates and unkempt beards of the menfolk. The only surprise is that the Golden Cockerel seems to be rather more green than gold, a disappointment enhanced by the fact that we are influenced by the colours of the well-known contemporary poster of Le Coq d’Or, which dresses the bird more appropriately but in a costume that could never have been made for actual dancing. One major change from the Ballets Russes performances of Fokine’s work is that his golden cockerel was always a woman. Here, although of course the sung role is unchanged (Zarina Samadova) the title role was danced by Pavel Okunev, a small dancer who can apparently jump forever. In another reversal of modern-day political correctness, the roles of Tsar Dodon’s two silly sons are danced by women, both coincidentally named Ekaterina (Blashchik and Zaitseva), but sung by men (Sergey Petrishev and Denis Boldov**).

I make no pretensions to be an opera critic but to my untrained ears the singing of this ensemble was a highlight amongst many successes, notably in the impressively profound bass of Alexander Tsilinko as Dodon and by the gorgeous soprano, Olesya Titenko as the Queen (Tsaritsa) of Shemakha. Their centre-stage, action-based duet – the only notable dramatic movement for the opera singers – in the seduction scene of act two (the one Rimsky-Korsakov infused with more sexual innuendo than a Carry On film) – was a triumph. The Natalia Sats Orchestra – passionately conducted by the company’s musical director, Alevtina Ioffe – and the opera chorus were excellent. More that 200 people came from Moscow to put on this show – no wonder that Diaghilev could not afford to tour the opera-ballet after those initial performances in the summer of 1914. Well done to Liepa and Co – not to mention their sponsors – for making it happen again.

Another change from the original is that Isaakyan and Liepa tip their caps in tribute to Diaghilev by having “him” open and close proceedings and double-up (in top hat, white scarf and tails) as the sung role for the Astrologer (Petr Melentiev), which is an affectation that works well, fitting neatly into the satirical aspect. When the idiotic Tsar who has lost his sons and a war (importantly against enemies from the East) is killed by the Golden Cockerel for reneging on a promise, the people cry out “what do we do, what can we do without a Tsar”? And it is left to the character of Diaghilev to tell them that the future lies in their own hands. When he composed the opera in 1907, Rimsky-Korsakov parodied the imperial regime of Tsar Nicholas II but he could also have been looking into a crystal ball to make a satire that is equally relevant to the Russia of 2014.

Graham Watts writes for londondance.com, Dance Tabs, Dancing Timesand other magazines and websites in Europe, Japan and the USA. He is Chairman of the Dance Section of the Critics’ Circle in the UK.